The following chart shows the relationship since 1929 between the monetary base (per dollar of nominal GDP) and short-term interest rates. This is our variant of what economists call the “liquidity preference curve,” and is one of the strongest relationships between economic variables you’re likely to observe in the real world. After years of quantitative easing, the monetary base now stands at 24% of GDP. Notice that less than 16% was already enough to ensure zero interest rates, so the past trillion and a half dollars of QE have done little but increase the pool of zero-interest assets that are fodder for yield-seeking speculation. Notice also that unless the Fed begins to pay interest to banks on their idle reserves, the Fed would have to contract its balance sheet by about $1 trillion just to raise Treasury bill yields up to a fraction of one percent. So the primary policy tool of the Fed in the next couple of years will likely be changes in interest on reserves (IOR). Get used to that acronym. 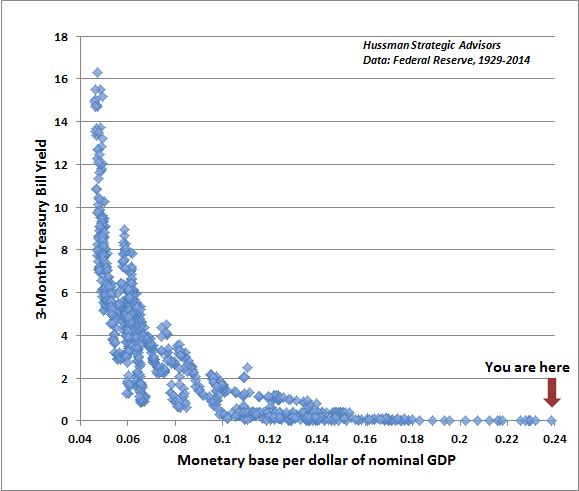