Russian foreign minister Sergei Lavrov discussed Ukraine by telephone with his Chinese counterpart, Wang Yi, on Monday, and claimed they had "broadly coinciding points of view" on the situation there, according to a ministry statement. 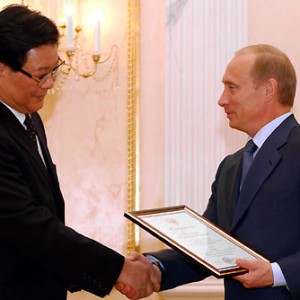 President Bill Clinton, along with the British, signed in 1994 a nearly forgotten agreement to protect Ukraine’s borders. Ukraine now is appealing to the countries that signed the agreement.

As the British Daily Mail points out, it means that, technically, if Russia were to invade Ukraine, it would be difficult for the U.S. and Britain to avoid going to war.

Given that the late Russian president, Boris Yeltsin also signed it, it was apparent that it wasn’t expected that the Russians would take the action that Putin now is undertaking.