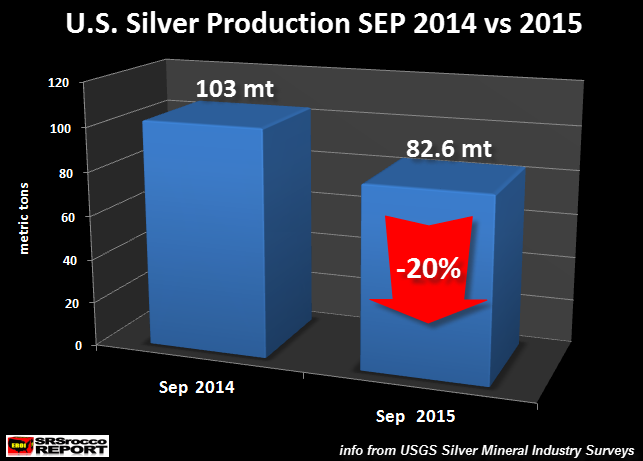 As we can see from the chart U.S. silver production fell to 82.6 metric tons (mt) in September compared to 103 mt during the same month last year.  This amounts to a decline of 20.4 metric tons or a 20% plunge versus last year.

This is a large amount if we compare the total decline year to date in 2015 (JAN-SEP) is only 41 mt (5%).  I asked the USGS silver specialist if he thought the September’s production figures would be revised higher in the following months.  He responded by saying, “Probably not.”

Falling silver production is also taking place in several of the top producers in the world:

As I have stated in many articles and interviews, PEAK SILVER will occur first in the base metal mining industry where the majority of by-product silver is produced.  According to the data from the 2015 World Silver Survey, 55% of all silver produced in 2014 came as a by-product of zinc, lead and copper production.  Furthermore, 13% came as a by-product of gold mining, while the remaining 31% was from primary silver production.

Global silver production will fall more rapidly in the following years as an increasing number of base metal mines shut down due to lower copper, lead and zinc prices.  This will occur right at a time when investors finally realize just how undervalued silver is compared to most of the highly overvalued paper garbage the world is invested in.