“The euro is fragile, it’s like building a castle of cards, if you take out the Greek card the others will collapse.” Varoufakis said according to an Italian transcript of the interview released by RAI ahead of broadcast.

The euro zone faces a risk of fragmentation and “de-construction” unless it faces up to the fact that Greece, and not only Greece, is unable to pay back its debt under the current terms, Varoufakis said.

“I would warn anyone who is considering strategically amputating Greece from Europe because this is very dangerous,” he said. “Who will be next after us? Portugal? What will happen when Italy discovers it is impossible to remain inside the straitjacket of austerity?” 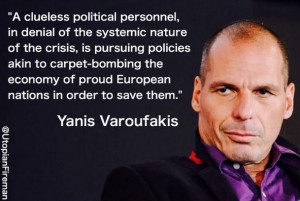