Ryssland kryper ur US treasurys in allt högre takt

Readers may recall that last month we first reported  that for all the confusion about sharply higher yields in April, the explanation was simple: it was Vladimir Putin who liquidated a whopping half of Russia's Treasury holdings, which declined by $47.4BN to just $48.7BN - the lowest since 2008 - from $96BN in March.

But wait, it gets better, because as Trump continued to jawbone about more sanctions targeting Russia, Putin did not stop and in May he continued what was an outright liquidation of Russia's TSY holdings, which plunged by another $40BN, or 82%, from $48.7BN to just $9BN in May. Keep in mind this was over $100BN at the start of the year.

It appears that When Putin warned he would diversify Russia's state reserves  -out of Treasurys - he was serious.

And this is what a very politically motivated liquidation of Treasury holdings looks like. 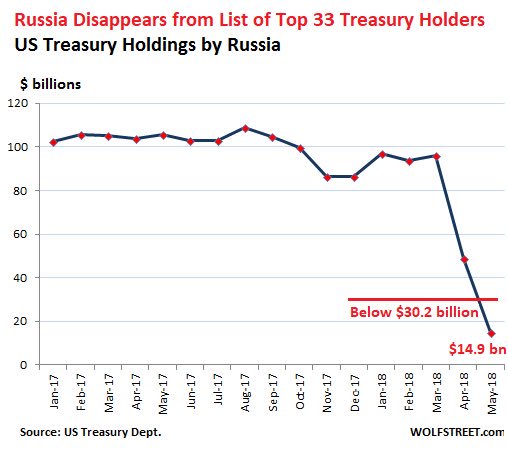